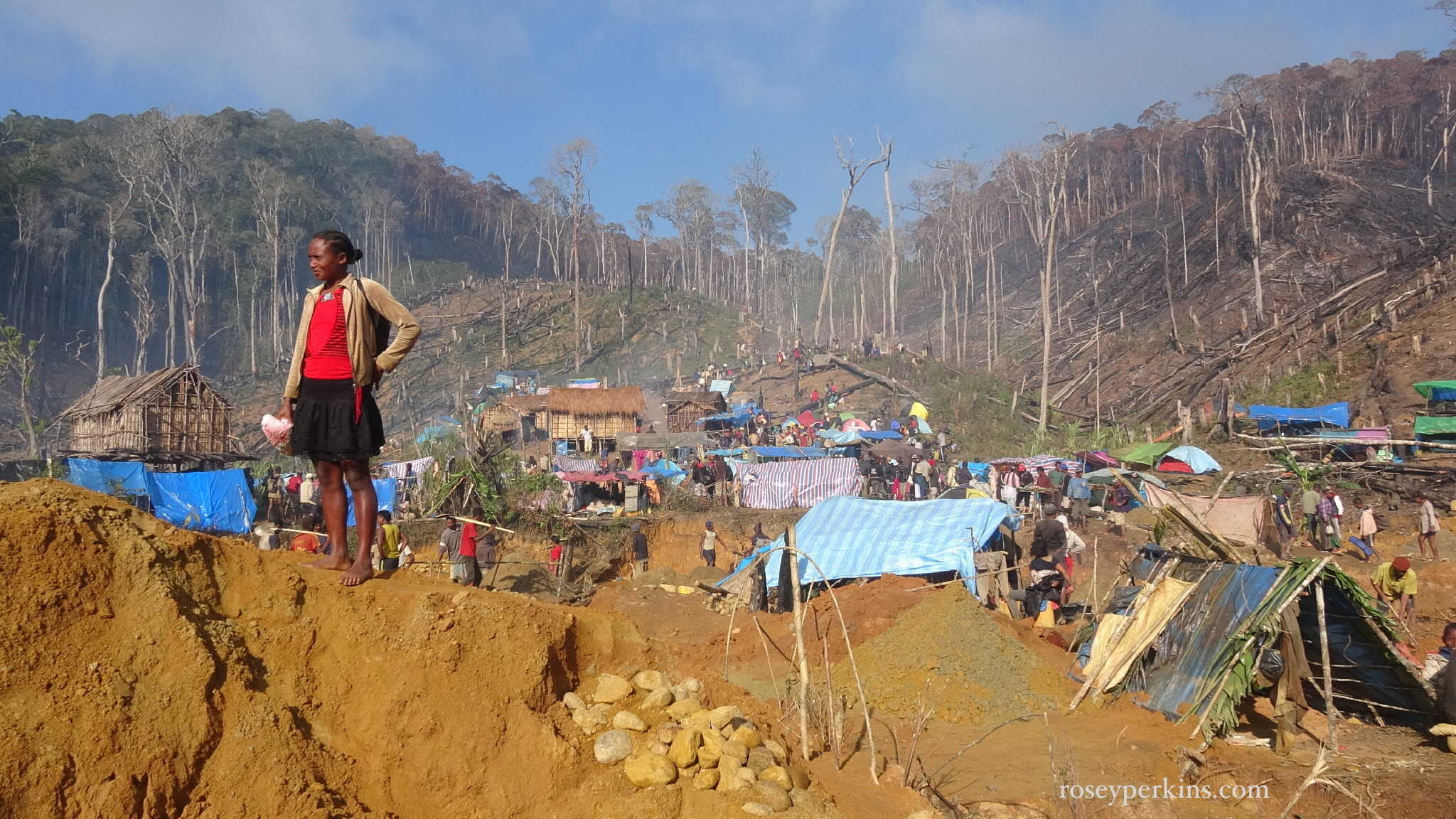 Thoughts On A Visit To A Sapphire Rush

A “sapphire rush” which has escalated to approximately 45000 people occurred in the east of Madagascar, near Ambatondrazaka, last month. Blue and sought-after orangish-pink sapphires +100 carats (the size of a squash ball) are reported to have been found there. I was one of many, among miners, food sellers and porters to walk 12 hours into the jungle and to live alongside miners in a make-shift tented community. Living conditions were basic and there was no sanitation. I photographed the mining activity but it dawned on me in the throng of people that while my search had been for sapphires, the scene was much more complex than that.

Miner and a tented community behind her. Photo: Rosey Perkins

This mining site is in an area under international protection for conservation. Madagascar is home to some of the most diverse and rare flora in the world. When the ground is shared with precious stones and poor people, conservation is not a simple formula. “You can’t talk about conservation to hungry people,” said Colleen Begg of Niassa Lion Project…and these people were certainly hungry. I saw toddlers, mothers and grandmothers make their way along the 35 km jungle track in flip flops, jelly shoes or with nothing on their feet at all. Their motivation went deeper than hunger. They do not trust their Government: one miner at the site even told me he was working quickly because the Government would soon take over and then [he believed] they would mine it for themselves and for their own profit.

In 3 days I saw no violence, it was just a hive of industry in one of the World’s last rainforests. Mining in a protected area is an offence that could lead to imprisonment, but in such numbers little could be done to deter the miners. The Gendarme did not have the physical capacity to evict them.

For the miners, sapphires weren’t the end game, they were the facilitator. This was their chance to elevate themselves; everyone had come to this site with a problem to fix. One miner introduced himself as a law student. He told me that for several years he had been unable to pay the bribe his university had asked from him. He needed to find a stone in order to graduate. Another said he wanted a car. The atmosphere was frenzied, as people anticipated a lock-down from the Government, which held a responsibility to protect the land.

There is however, in general, a disconnect between the theoretical penalties of mining in protected areas and reality on the ground. Cheers of self encouragement rose from the miners at work and in them I heard empowerment, there was sense of political populism. In the past, law enforcement has occasionally led to further environmental problems.

Sapphire in front of the rush site. Photo: Rosey Perkins

It’s not only the mining that impacts the environment but also the consequences of large numbers of people seeking supplies: wood for building houses and charcoal for cooking as well as food. On my way back to town, I passed several goat herders bringing meat to the miners. If the meat supply had been insufficient, the miners may have turned to bush meat. Madagascar’s rich gem soils are, as if Murphy had planned it, concentrated beneath an area essential for the survival of rare and endangered species. “Why don’t they plant trees on the West of the island where there are no sapphires,” asked a miner in earnest. For local people mining is a much needed source of income and the populist sentiment there says it is their right to mine “their” soil. But Madagascar’s rich biodiversity is one of it’s main attractions for tourists and damaging that would lead to serious economical consequences for the country.

Having visited and spoken to people at Gemfields’ mine in Mozambique and their London HQ, it’s clear the situation isn’t as simple as providing employment or alternatives. Their research into informal miner’s motivation for work suggested that a formalised mining job in a larger mining company would not necessarily satisfy many miners, who may be driven by dreams of finding a fortune, or supplement their main income as subsistence farmers during a period their farmland is unproductive. The demand for traceability is driven by the jewellers, but to formalise such mining is to demand a cultural shift and changes to local mining laws, health, safety and export conditions which only larger producers can currently respond to.

Rushes in Madagascar occur frequently and in remote areas. “Madagascar is a difficult country with frequent conflict between conservationists and the gem industry. As it is one of the poorest countries in the world, it is a complex problem,” said Vincent Pardieu (GIA) who travels to mining areas across the globe to build a reference collection for the origin determination of ruby and sapphire. If this rush leads to further dialogue between conservationists and gem industry leaders, it would hopefully be positive for Madagascar.

This site uses Akismet to reduce spam. Learn how your comment data is processed.